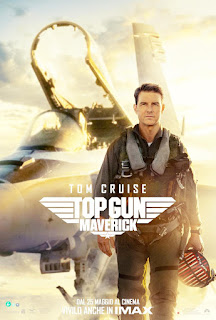 The floor shakes, the speakers rattle, and Tom Cruise sparkles as Pete "Maverick" Mitchell in the sequel to the 1980's flyboy drama Top Gun.   Forty years have passed, and Mitchell remains a Captain, even though he's the Navy's best pilot.  The film opens with Maverick aiming for outer space until his plane disintegrates.  thrown off that base, he gets the call to teach his tricks to a new generation and ultimately lead them on a secret mission to bomb an enemy nuclear weapons facility.   Along the way, Maverick utters a string of cliches, sparks a romance with an old girlfriend played by a smashing Jenifer Connolly, and bonds with the son of Maverick's old friend "Goose" who may or may not have died because of him.  Top Gun Maverick feels familiar, tells an easy to like story, it's fun, it's loud, and everything turns out swell.  Tom Cruise has done it again.  He helms the movie that may save movies for a new generation.  Yeah, maybe it's not great or new, but Heck, you can't have everything.