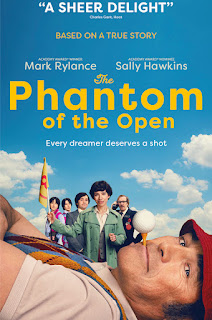 In 1976, an out of work crane operator named Maurice Flitcroft entered the British Open Golf Championship, the world's snootiest golf tournament.  Flitcroft wanted to follow his dream, even though he'd never played an actual round of golf, just studied a book and hacked around on the beach.  Once in the Open, his score of 121, put him firmly in last place but the heart he showed making those 121 strokes won him fans around the world. In The Phantom of the Open Mark Rylance plays Flitcroft with a twinkle in his eye.  He elevates a possible one joke movie into something heartwarming.  Sally Hawkins adds depth as Flitcroft's supportive wife.  A family dynamic involving a disapproving oldest son and his disco dancing twin brothers made my head spin, in a good way.  I'm sure The Phantom of the Open stretches a point here and there but it mostly checks out.  Even the part about Flitcroft reentering the Open under assumed names wearing ridiculous disguises.  I personally love his entry as "Arnold Palmtree."  You don't have to love golf to love The Phantom of the Open.  Golf is secondary to this delightful story of an eccentric and the family that spurs him on. The Phantom of the Open arrives the same weekend a handful of greedy PGA players jump to a Saudi financed tour. Maybe they ought to watch this and remember the days when they played for fun.