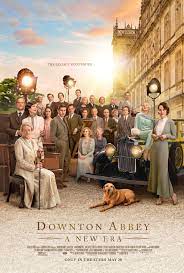 Who needs another season of Downton Abbey (there were six of them on PBS) when we've got the Downton movies?  Not me.  I joined a sprightly audience of grey hairs to take in the latest at my neighborhood independent cinema, the Avalon.  My shaved hit fit perfectly with the senior demographic to which I certainly belong.   Maggie Smith returns to fling barbs as the plots revolve around her inheriting a villa in the south of France. It sems she had a fling many years ago resulting in the gift which she plans to give to her granddaughter Sybbie, whose mother died in season three after marrying the family chauffeur who has successfully moved up in class.  Class, that's what it's all about.  And money, which Downton needs to repair the roof.  Lady Mary, now head of the estate, rents the place to a film company laying the groundwork for a plot that echos Singing in the Rain.  It's 1928 and movies are changing to talkies and the lead actress has a rather low-class accent.  Downton Abbey offers no explosions or car chases but rather celebrates dialog and costumes and occasional dollops of humor.  I won't call it great, but I will call it a lovely way to spend an afternoon.  I must warn that we lose a major character this time, but I'm wondering how the family will change during the Depression, and what about the World War in their future?