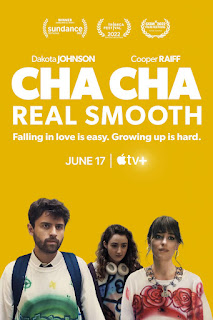 Writer/Director/Actor Cooper Raiff creates a charming young adult story in Cha Cha Real Smooth.  New graduate Cooper returns with his degree to live at home with his mother and little brother and his mother's boyfriend.  Unable to find a proper job, he sells hot dogs by day.  One night his mother needing a break asks him to take his little brother to a Bar Mitzvah.  At the party, he discovers his talent as a "party starter"---that is a guy who encourages kids to dance and mingle.  He bonds with a young autistic girl named Lola played by Vanessa Burghardt.  Their connection wins the attention of her single mother played by Dakota Johnson. Their meeting turns into an intriguing "will they or won't they" romance. Dakota Johnson gives one of her most charismatic performances.  I will look forward to whatever Cooper Raiff does next.