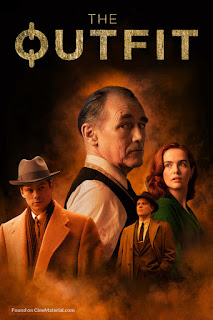 Mark Rylance quietly goes about his business designing tailor made clothing for the men of 1950's Chicago, including the mobsters who use his store as a front.  Quietly biding his time and keeping his secrets, events pull him into action one murderous night.  The Outfit plays on slang for the mob and descriptions of the bespoke suits Rylance lovingly creates.  The plot unfolds like a play, confined mostly to the shop, where a drama unfolds involving betrayal, a double cross, and a possible informer or rat. Think Cagney chanting "You rat, you dirty rat."  The Outfit captures the feel of those great gangster movies with the added attraction of a first class who done it.  Now streaming, The Outfit captured me from the first moments.  It'll capture you too.