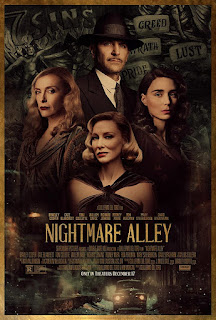 I confess.  I love film noir - the gritty crime dramas of the 1940's.  The 1947 version of Nightmare Alley (starring Tyrone Power) was one of my favorites --- until I watched Guillermo del Toro's update.  Wow!  This update sizzles---this cautionary rise and fall tale of a carnival con man goes deeper and darker than the original dared.  Bradley Cooper plays Stan Carlisle, working alongside Zeena the mind reader (Toni Colette), whose drunken husband (David Strathairn) holds back the act.  An accident eliminates the husband and paves the way for Stan to take Zeena's secrets on the road.  He drops Zeena, for good-hearted Molly (played by Rooney Mara) a beloved young woman who grew up in the carney community.  Soon, the couple hit the big time as star attraction of a hotel night club.  The Great Stanton amazes audiences with his power to read minds.  He meets his match when psychologist Lilith Ritter arrives.  Cate Blanchett vamps within an inch of high camp as the story's femme fatale.  Assessing Stan with an icy gaze and a gash of lipstick the color of a traffic light, Lilith suggests scamming millionaire Ezra Grindle, played by Richard Jenkins, in a beyond the grave seance.  This Nightmare Alley update looks wonderful, with color drenching the screen, highlighting carnival grime and art deco brilliance.  Great actors pop up in small roles in the lavish cast.  Del Toro improves the script, going where the original didn't dare.  4 Stars and a wow for one of my favorite films this year.