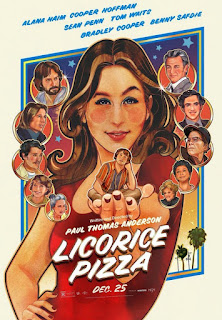 Licorice Pizza comes out of the gate full speed as Cooper Hoffman (son of the late Phillip Seymour Hoffman) meets Alana Haim.  Hoffman plays Gary, a 15-year-old hustler who begins hitting on Alana the moment he sees her.  Never mind she's ten years his senior, he insists on taking her to dinner.  Their back and forth matches the best of the classic screwball comedies.  Somehow, they become friends and embark on a series of adventures that include a showbiz appearance, a waterbed store, and a pin ball parlor.  Set in the San Fernando valley in the early 1970's, Licorice Pizza often feels like American Graffiti a decade later.  Newcomer Alana Haim steals this show.  Like Gary, you won't be able to take your eyes off her.  The friendship between a 15-year-old boy and a 25-year-old girl has never been this entertaining.