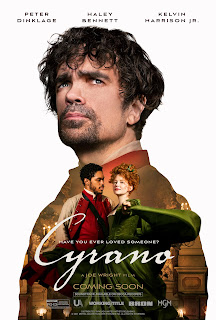 Peter Dinklage plays the unlucky in love swordsman and wordsmith in this update of the classic drama.  You'll be surprised to learn this version is a musical, based on an off-Broadway production from 2019.  Originally Cyrano possessed a giant nose ruining his romantic prospects.  In this version, Dinklage must deal with his unusually short stature.  Peter Dinklage has distinguished himself as a fine actor. He'll break your heart in this creative surprise.