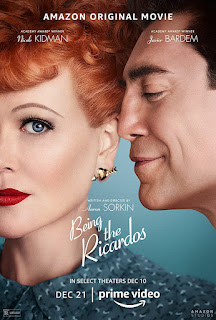 Nicole Kidman dyes her hair flaming red and produces a voice that sounds amazingly like Lucille Ball in Being the Ricardos.  The backstage drama of television's first massive hit includes most of the behind-the-scenes tidbits from various tell all books and articles:  Lucy accused of being a Communist; Desi cheating on Lucy; network and sponsor interference and the crisis of Lucy's pregnancy; Desi's brilliance; Lucy's brilliance; and on and on. Being the Ricardos feels more like fun than tension filled drama and that's ok. I winced a little watching Javier Bardem recreating Desi's songs and Nicole Kidman recreating Lucy's greatest moments.  I especially liked Nina Arianda as Vivian Vance and J.K. Simmons as William Frawley.  Simmons as Fred Mertz adds a touch of humanity to this tribute.