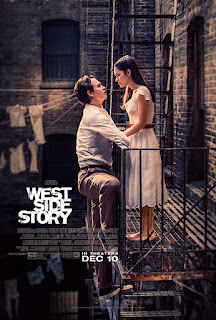 Steven Spielberg puts his stamp on West Side Story in the opening frame, as the Jets leap among the rubble of the west side buildings demolished to make way for Lincoln Center.  Stealing cans of paint, the Jets deface a Puerto Rico flag mural, setting up the conflict between lower class white kids (Jets) and newly arrived Puerto Ricans (Sharks). West Side Story tells a story of love at first sight, when Tony played by Ansel Elfort glimpses Maria played by Rachel Zegler.  He's Polish, she's Puerto Rican.  The new version wisely casts Rita Moreno (Anita in the original 1961 film for which she won an Oscar), as Valentina, owner of the local drug store where Tony works.  Moreno gets her moment in a solo of "There's a Place for Us."   Ansel Elgort and Rachel Zegler have the right chemistry for this fable.  Sometimes Spielberg calls a little too much attention to his directing and staging.  Spielberg rearranges some of the scenes leading to a let down at the end.  Nevertheless, I spent most of the day after West Side Story humming and singing the music.  I bet you will too.