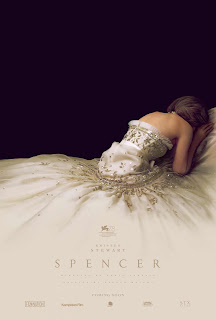 I never imagined Kristen Stewart as Princess Diana, however, she manages the illusion in her new movie Spencer.  Directed by Pablo Larrain - the man who recreated Jackie Kennedy in Jackie - Spencer creates a similar narrative of a famous woman.  Taking place over a Christmas weekend at the Queen's country estate, Spencer turns Diana's unhappy marriage into madness, as she talks with the ghost of Anne Boleyn (the Queen beheaded by Henry VIII) while later slurping down a string of pearls given both her and Prince Charles's Mistress that season.  Spencer suffers in comparison to The Crown.  We view one sad weekend instead of the larger context.  The portrait makes Diana unsympathetic. It's a great performance but a pain to watch.