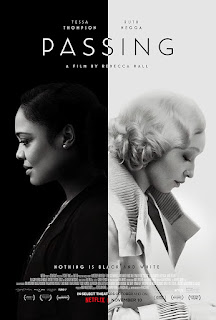 Passing tells a compelling story, enhanced by beautiful black and white film.  Set in 1920's New York,  Tessa Thompson steps into an upscale tea room to escape the heat.   With her light skin and hat pulled down, she passes.  A child hood friend played by Ruth Negga recognizes her and approaches.  The renewed acquaintance lives her life as a white woman, light skinned enough to marry a white man and give birth to his child.  But Negga misses her Black roots, latching on to Thompson's family.  An encounter with Negga's husband, played by Alexander Skarsgard, reinforces the danger of her secret.  Passing moves slow, like a dream, all the while upping the tension.  The film looks beautiful, set in the  format ratio of earlier films, the black and white photography a character of its own.  Actress Rebecca Hall directs and creates a beautiful, disturbing portrait.  This small gem packs a powerful punch---one of the year's most extraordinary films.