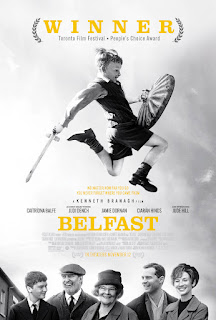 In Belfast, Kenneth Branagh remembers his childhood in Northern Ireland during the Protestant/Catholic  "Troubles." Told through the eyes of a nine year old Buddy, a character based somewhat on Branagh.  Buddy enjoys a warm childhood in a loving family.  He experiences childhood adventures even as crowds riot and firebomb enemies.  Jude Hill as Buddy carries the day leading a fine cast.  Jamie Dornan plays his father, working construction in England and considering moving for safety.  His mother Caitriona Balfe loves Belfast and her roots as much as does Buddy.  Grandparents played by Ciaran Hinds and Judi Dench add depth and poignance  Belfast speaks to those who remember childhood and the places they've left behind.