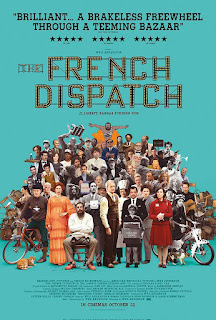 Director Wes Anderson dreams up a fictional magazine (think the New Yorker) illustrating three shaggy dog stories. They include the tale of an artist, his muse, and efforts to transport his work from  a prison wall to the masses; a college revolution circa 1968, and a gourmet dinner that turns into a kidnap chase.  Anderson's impressive cast includes Bill Murray, Adrien Brody, Tilda Swinton, Saoirse Ronan and many others.  I think I caught a glimpse of Henry Winkler.  Jeffrey Wright stands out as a food critic fondly remembering a wild night of cops, kidnappers, and food.  The French Dispatch mixes animation,  storybook art, and eye popping visuals that look so good they make you laugh.  Sometimes these stories run low on gas, but the overall effect delights. I was the last one out of the theater, settling in for the credits, a collection of make believe magazine covers set to charming music.  It's not often you see brilliant and silly, shallow and thought provoking in one screening.