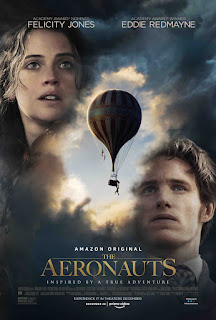 "The Aeronauts" imagines a daredevil woman and a weather guy, high in the sky in a hot air balloon. Their voyage looks like a video game. 1 star, rated PG-13.
"Would you like to fly in my beautiful balloon?" The Fifth Dimension sang that question in the 1960s. In the case of the Aeronauts, my answer is "No Thanks." Felicity Jones plays Amelia Wren, a daredevil balloonist who joins meteorologist Eddie Redmayne to advance the science of weather. They float higher in the sky than ever before, but it's tough up there in the high, thin air. The couple huff and puff, and at one point, Wren has to climb to the top of the thing to let out a little gas. "The Aeronauts" makes a thrilling feat tedious. 1 star, rated "PG-13."
Posted by Arch Campbell at 9:50:00 PM