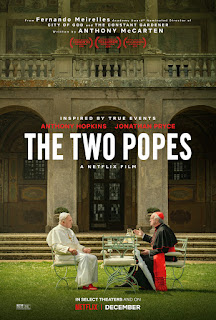 Anthony Hopkins and Jonathan Pryce surpass expectations as Pope Benedict and his successor Pope Francis. "The Two Popes" imagines a delightful"What if?" conversation, circling faith and doubt between two widely different personalities. A 4-star awards contender.  Rated PG-13.
A sparkling script imagines Argentine Cardinal Jorge Bergoglio on a visit to the Papal Palace to request retirement from Pope Benedict. Benedict disagrees. The two begin a series of conversations, culminating in Benedict's resignation and the election of Cardinal Bergoglio as Pope. The summer home, the Vatican, and the Sistine Chapel provide breathtaking backdrops. "The Two Popes" rises above the usual with playful moments including music by ABBA, as well as food cart pizza and Fanta soda. Hopkins and Pryce on screen together is as good as it gets.
Posted by Arch Campbell at 10:02:00 PM