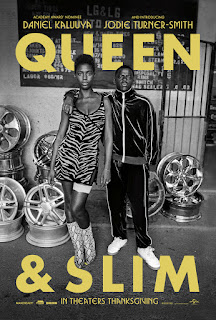 Queen & Slim updates the Bonnie and Clyde, Thelma & Louise, man and woman on the run thriller. Daniel Kaluuya and Jodie Turner-Smith's first date turns into a race for their lives that twists between exhilarating and depressing. This is the kind of thrilling movie that revives one's love of movies. 3½ stars, rated R.
Daniel Kaluuya meets Jodie Turner-Smith at a cheap diner on a blind date that goes nowhere fast. He offers her a ride home. A minor traffic stop escalates into life and death; and in self defense, Slim (Kaluuya) shoots and kills the bullying policeman who pulled them over. With that, the couple runs for their lives, hijacking cars, hiding with relatives and hatching a plan to escape to Cuba. Kaluuya's already won our respect as the lead in "Get Out." Newcomer Jodie Turner-Smith burns into our consciousness in this breakout role. One character jokingly calls them "the black Bonnie and Clyde." Exactly, with a dash of "Thelma & Louise" and maybe a little of Butch and Sundance too. "Queen & Slim" puts the thrill back in crime thriller. This one's the real deal.
Posted by Arch Campbell at 10:14:00 PM