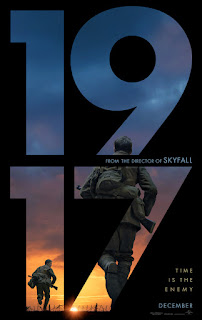 Director Sam Mendes executes a technical marvel in "1917." The camera appears unedited, as it follows two messengers during their desperate attempt to stop an invasion, the Germans have set as a trap. "1917" compares favorable with the great war films, including "Saving Private Ryan." 3 stars, rated "R."
History fans know the year 1917 as one of worst periods of one of the worst wars. Two grunts awake from the luxury of an afternoon nap, to receive orders to rush a message across enemy lines. The lives of thousands hang in the balance. The camera follows George MacKay and Dean-Charles Chapman on their mission. The unedited effect gives us the perspective of walking behind the men. Segments involving a cave in and a plane cash come out of the blue, just as in real life. 3 stars, rated "R."
Posted by Arch Campbell at 9:46:00 PM