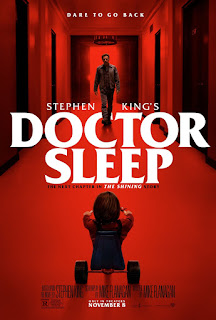 Doctor Sleep invites Stephen King fans, as well as lovers of "The Shining" for a greatest hits grown-up return to the Overlook Hotel. The new storylines have the bite of the original "Nightmare on Elm Street." Horror fans delight: This is the real deal. 3 stars, rated "R."
"Doctor Sleep" will disturb your sleep, thanks to a visually chilling sequel to Stanley Kubrick's 1980 classic "The Shining." Ewan McGregor stars as Danny Torrance, the kid traumatized in the Overlook Hotel almost 40 years ago. A struggling adult, he turns to alcohol, drugs, and violence. The move to a small New Hampshire town connects him to A.A. and a mentor played by Cliff Curtis. A job in hospice puts his "Shine" (which I understand as the ability to communicate with the world beyond ours) to good use. The adult Danny's story intersects Rebecca Ferguson as the leader of the cult "True Knot," a group that lives off the pain and suffering of others, including small children. Kyliegh Curran plays Abra, whose shine powerfully connects her to both McGregor and the cult. The finale brings the threads to the Overlook Hotel from Kubrick's classic. I'm not a horror fan, but "Doctor Sleep" drips with mythology and shocking twists. Fans of "The Shining" get a glimpse of a few of the classic's greatest scenes and even a taste of "Here's Johnny!" Steven King fans will love it: They don't sleep much anyway.
Posted by Arch Campbell at 11:58:00 AM