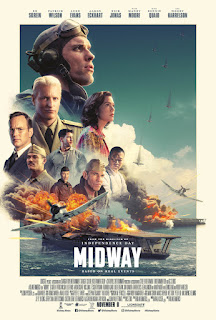 "Midway" tries (and fails) to recreate the great war films of the past with cliched dialog and fake computer graphics. 1 star, rated"PG-13."
"Midway" recreates the battle of Midway in 1942, considered one of the turning points of the World War II's Pacific campaign. "Midway" feels like a 1950s John Wayne war movie. The script serves up the cliches of those earlier films. Computer graphics recreate the battles, starting with the Pearl Harbor attack, and moving to the main event. CGI enhances some stories; but in this case, they make the battles look like cartoons. A parade of older actors spout the clunky dialog, including Woody Harrelson as Admiral Nimitz, Dennis Quaid, as Vice Admiral "Bull" Halsey, Aaron Eckhart as Lt. Colonel Jimmy Doolittle and Patrick Wilson as Naval Intelligence office Edwin Layton, the little guy who speaks truth to power. "Midway" feels long and disappointing.
Posted by Arch Campbell at 12:28:00 PM