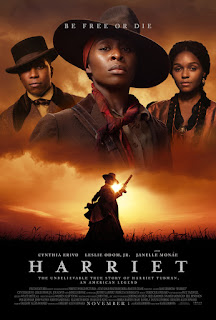 "Harriet" tackles the amazing story of Harriet Tubman, who used the underground railroad in the years before the Civil War to free hundreds of slaves below the Mason-Dixon line. Biography films often fail, but Cynthia Erivo's performance soars. 3 stars, unrated.
At 125 minutes, "Harriet" works to capture the spark of Harriet Tubman's achievement, helping slaves to freedom on the underground railroad in the years before the Civil War. At times, this biography resorts to speeches and dialog to move the story forward. The abundance of talk and speeches slow down the magic. However, Cynthia Erivo defies viewers to lose interest. She presents the aura of a history book super hero. "Harriet" gains speed in the final third, building to a series of end titles of accomplishments, that goes beyond impressive.
Posted by Arch Campbell at 12:42:00 PM