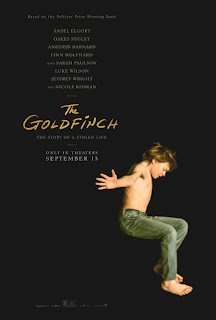 "The Goldfinch" adapts another phone book-sized novel to the screen. The film looks beautiful and works for a time, until the complicated plot serves up one coincidence too many, and made me check my watch and shift in my seat. An all-star cast led by Ansel Elgort and Nicole Kidman can't quite pull this off. 1 star.
The trailer for "The Goldfinch" made me want to see this film. A young boy and his mother stroll through the Metropolitan museum. A bomb explodes. The boy's mother dies. An old man hands him a ring. The boy takes a painting out of the rubble. This begins an epic journey from the arms of Nicole Kidman's kind New York City family to his abusive father in the Las Vegas desert,
and returns him to New York to antique restorer Jeffrey Wright. The complicated plots works well enough, until a twist or two feels too contrived. The sets looks posh. The acting is fine. The cast, superb. After a while "the goldfinch" collapses under all of this heavy weight.