Linda Ronstadt: The Sound of My Voice Review - 3½ Stars 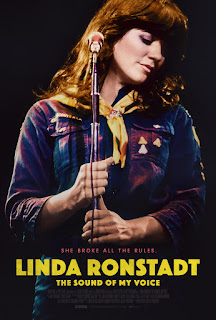 "Linda Ronstadt: The Sound of My Voice" revisits the talented singer's career, that seems more poignant, considering age and sickness have taken her voice. 3½ stars.
The documentary is part of the run up to Ronstadt receiving the Kennedy Center honor later this year. Based on her recent memoir, the film includes comments from Dolly Parton, Emmylou Harris and Bonnie Raitt, as well as Jackson Browne. She grew up outside Tucson, Arizona on the border with Mexico. The film highlights her Mexican roots, and career choices that included operetta and golden age standards. I loved every minute of this.
Posted by Arch Campbell at 4:50:00 PM