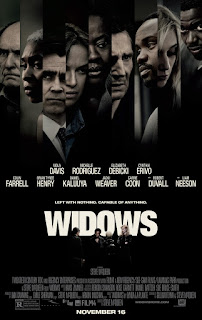 "Widows" begins with a Rock 'Em Sock 'Em heist, led by Liam Neeson and his crew of professionals. Something goes wrong. The getaway van explodes. The men die. As Neeson's widow, Viola Davis must sort things out. She learns in short order, she owes the mob millions, and must complete a final heist to pay her husband's debt. What could have turned into another "Oceans Eight," becomes a multilayered story of crime, the mob, politics, and patriarchy. Robert Duvall and Colin Farrell breathe life into the political plot. Daniel Kaluuya follows his star turn in"Get Out" with his take on a young mobster. As Viola's partners in crime, Michelle Rodriquez, Cynthia Erivo, and Elizabeth Debicki hit the right notes. As for Viola Davis, I couldn't take my eyes off her. She's the soul of this stunning thriller. "Widows," 3½ stars, rated "R." Does it deliver what it promises? Puts the thrill back in thriller. Is it entertaining? Fascinating. Is it worth the price of admission? A Winner.
Posted by Arch Campbell at 5:35:00 PM