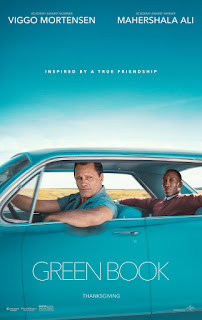 In 1962, black jazz pianist Don Shirley hired a white Italian NYC bouncer named Tony the Lip to drive him on a concert tour of pre-civil rights Southern cities. As a result of their trip, the men became lifelong friends. "Green Book" tells their story with warmth, humor, and drama. The title refers to the guide for African Americans traveling in the south to hotels and restaurants that would  accept them. Shirley discovers Tony has his back during the expected Jim Crow insults. Tony picks up an equal number of life lessons. You might consider " Green Book" a combination of "Driving Miss Daisy" and "the Odd Couple." The surprise comes in the script, which never fails to entertain. Linda Cardellini has some wonderful moments as Tony's worried life. Mahershala Ali sets a regal tone as the musician. Viggo Mortensen makes Tony a big, lovable lug. Peter Farrelly writes and directs. He gives Linda Cardellini the best curtain line of the year. "Green Book," 3½ stars, rated PG-13.
Posted by Arch Campbell at 6:01:00 PM