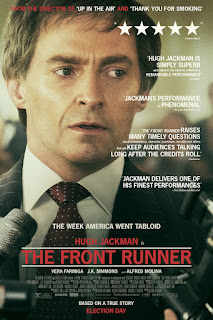 Director Jason Reitman hopes "The Front Runner" will join the ranks of "All the President's Men" and "The Candidate" as a political thriller. He misses by a mile. Hugh Jackman plays Senator Gary Hart, the politician favored to win the Democratic nomination in 1988. Reporters catch wind of an affair with a saleswoman named Donna Rice. Hart meets her on a Florida cruise. "The Front Runner" trots out all the clichés of a presidential campaign - smoking, talking, barking orders, etc.. I think it wants us to ponder life in American with Gary Hart as President. The movie bemoans the rise of tabloid news in mainstream media. Jackman makes Hart huffy, unlikeable, and too dense to know the affair will sink his campaign. "The Front Runner," 2 stars, rated "R." Does it deliver what it promises? Two hours of clichés. Is it entertaining? Portrait of an unlikeable senator. Is it worth the price of admission? Disappointed me.
Posted by Arch Campbell at 4:44:00 PM