A Star Is Born Review - 3 Stars 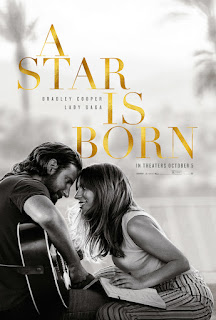 Bradley Cooper displays directing talent in his remake of "A Star Is Born." He gives the material a classic, old school touch. As a director, he composes his scenes beautifully, shooting concert footage from the artist's perspective and giving Lady Gaga Hollywood golden age-style closeups. "A Star Is Born" receives its third remake (or four, if you count the 1932 original drama "What Price Hollywood?") This version features Cooper as a country singer, who discovers Lady Gaga in a bar, and helps her get into the music business. Cooper's career slides downhill as a result of drugs, alcoholism and a hearing problem. Gaga's career climbs high, while Cooper's falls. Lady Gaga doesn't have Bradley Cooper's acting chops, but when she sings, she commands the movie. I'm not a fan of remakes, but this one avoids the usual pitfalls, thanks to great singing and wonderful production. "A Star Is Born," 3 stars, rated R. Does it deliver what it promises? Star-studded old school musical drama. Is it entertaining? Marvelous singing. Is it worth the price of admission? One of this year's most important films.
Posted by Arch Campbell at 2:45:00 PM