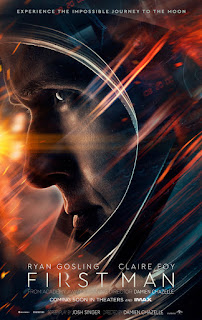 Neil Armstrong was a reluctant hero - a quiet scientist, who could figure equations while the craft he flies appears ready to break apart. Ryan Gosling plays the first man on the Moon as a strong, silent Gary Cooper type. He accepts the assignment to walk on the Moon with a silent, affirming nod of the head. "First Man" shows the strain on Armstrong's home life. Armstrong continues to grieve over the death of his daughter, early in his marriage. Claire Foy (so great as young Queen Elizabeth in "The Crown")  brings fire and anger to her portrait of an astronaut's wife. "First Man" begins with Armstrong bouncing off the atmosphere in a test plane, a bolt-busting experience preparing us for his later space flights, mounted with less technology than we have in our phones today. Once in space, the audience and I held our breath. "First Man" rewards us with a thrilling conclusion. "First Man" gave me goosebumps. "First Man," rated "PG-13," 4 stars. Does it deliver what it promises? A worthy companion to "The Right Stuff" and "Apollo 13." Is it entertaining? Fascinating. Is it worth the price of admission? One of the year's must-see movies.
Posted by Arch Campbell at 1:28:00 PM