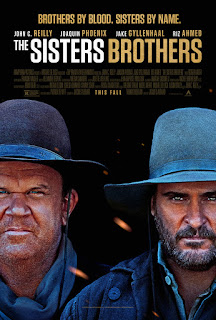 John C. Reilly and Joaquin Phoenix take us on an 1850s western adventure as "The Sisters Brothers." The ironic title sets up a couple hours of movie serendipity. The boys work as bounty hunting assassins/robbers in the 1850s. Their boss, the mysterious Commodore, sends them on a mission to find a scientist with a formula for finding gold in the streams of rural California. We follow their journey from Oregon to gold rush territory. They seek Riz Ahmed, who has teamed up with the man originally sent to capture him (played by Jake Gyllenhaal.) "The Sisters Brothers" assembles a collection of delightful twists and turns. This is not your father's western. "The Sisters Brothers," 3½ stars, rated "R." Does it deliver what it promises? Wacky western. Is it entertaining? It never lost my interest. Is it worth the price of admission? Great fun and wonderful acting.
Posted by Arch Campbell at 1:04:00 PM