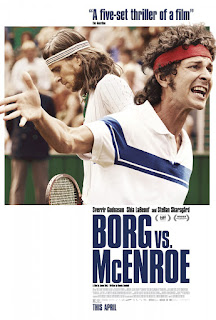 In 1980, tennis stars Bjorn Borg and John McEnroe turned the Wimbledon men's final into the stuff of legend. In the climactic match, neither player could close the deal, turning the playoff into a fight to the finish. "Borg vs. McEnroe" provides a character study of the two players, and finds they had more in common than fans knew. Borg had been a hot head, whose coach trained him to keep his emotions in check. The tennis world considered McEnroe a brat for his outbursts during various matches. Swedish actor Sverrir Gudnason turns the icy Borg into a fascinating character. The McEnroe role fits Shia LaBeouf. Even if you don't remember the outcome, this recreation's worth your time. "Borg vs. McEnroe," 3 stars, rated "R." Does it deliver what it promises? Exciting sports story and character study. Is it entertaining? Great tension. Is it worth the price of admission? Especially for tennis fans, and those who remember this legendary match.
Posted by Arch Campbell at 11:26:00 AM