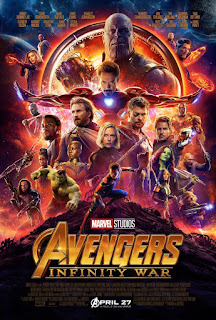 Every character from the vast Marvel comics universe shows up in "Avengers: Infinity War" to fight the villain. Thanos, as played by Josh Brolin, plans to collect the world's infinity stones and wipe out most of the population. "Infinity War" brings together Iron Man, Black Panther, the Guardians of the Galaxy crew, as well as Captain America, Thor, the Hulk and several minor characters whose appearance will stretch your knowledge of this universe. "Infinity War" starts slow, introducing this menagerie in a series of long, talky scenes. Once Thanos starts collecting his precious stones, the action heats up. "Avengers:  Infinity War" builds to a buzz-worthy ending which reviewers can't reveal, but which fans will talk about for some time. At the screening I attended, viewers gasped, laughed, and a couple said out loud "That's it?" Of course, this isn't it because part two's coming down the pike soon. Summer movie blockbuster time arrives with "Avengers: Infinity War." It's a fan's movie. It requires love and knowledge of the 18 earlier films. "Avengers: Infinity War," 3 stars, rated PG-13. Does it deliver what it promises? Grand opera meets comic books. Is it entertaining? Fans will Love. Is it worth the price of admission? For fans.
Posted by Arch Campbell at 12:17:00 PM