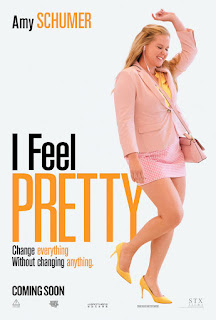 Amy Schumer almost makes her point in "I Feel Pretty." This comedy begins with the ancient plot point of a character hitting his or her head and changing. In "I Feel Pretty," Amy falls off her Soul Cycle bike. Instead of getting a concussion, she wakes up believing she has the looks of a super model. She now behaves confidently. That is, until she doesn't; but by then, learns her lesson about inner beauty. I laughed a few times, but those laughs felt like work. The cast includes a nice turn by Michelle Williams as the granddaughter of the founder of a cosmetics company, headed by Lauren Hutton. Schumer impressed a lot of viewers with her comedy "Trainwreck," in which she learned to make better life choices. "I Feel Pretty" feels derivative and not as good. Confidence is one thing: Better material is another. "I Feel Pretty," rated PG-13, 1 star. Does it deliver what it promises? Not very funny. Is it entertaining? Fitfully. Is it worth the price of admission? No thanks.
Posted by Arch Campbell at 12:09:00 PM