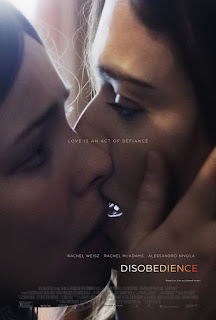 "Disobedience" begins with the death of an elderly Rabbi. His daughter (Rachael Weisz) hesitates before returning to the conservative Orthodox community in which she grew up. Years earlier, her father turned her out, when he discovered her same-sex romance. Returning for the funeral, Rachel reconnects with her youthful love (played by Rachel McAdams.) In Weisz's absence, she has married the Rabbi in line to take over the congregation. The two women rekindle their affair in several steamy scenes. "Disobedience" captures life in a closed society, but I found it hard to accept some opinions that change toward the end. "Disobedience" benefits from strong acting and beautiful set design. It's just a little too good to be true. "Disobedience," 2½ stars, rated "R." Does it deliver what it promises? Drama and sex. Is it entertaining? Well-acted. Is it worth the price of admission? Mixed feelings.
Posted by Arch Campbell at 5:44:00 PM