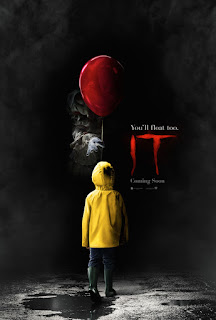 The audience screamed, jumped and laughed during the screening of Stephen King's deeply frightening "It." ABC did "It" as a miniseries in the 90's. The opening begins as an adorable little boy makes a toy paper boat with help from his big brother Bill (played by Jaden Lieberher.) The kid runs into a driving rain, and watches his plaything float down the street until it falls down the drain. But then, a glimmer of hope. A clown lives in the sewer, and offers to return the boat. I won't tell you what comes next; but I will tell you, it sets up the kind of jump-out-of-your-seat shared experience Hollywood hasn't seen in years. The story, which takes place in 1989, follows a group of misfit pre-teens known as the loser's club, led by Lieberher, a shy stutterer. The group finds a new member in Beverly, played by Sophia Lillis, rumored as the town's "fast" girl and a Molly Ringwald lookalike. Soon, the gang discovers they see things others don't, including the frightening clown played by Bill Skarsgård. "It" speaks in a creepy voice, changes identities and moods with the flick of a switch, and aims to add to his collection of missing people. The movie has a 1980s Spielberg vibe, courtesy of director Andy Muschietti. Kids talk like kids, race on bicycles, and band together against the town terror (as well as abusive adults and bullies.) "It" taps into the thing, that for generations, has made going to the movies so pleasurable... a shared experience. I laughed. I screamed. I breathed easy, when the credits rolled. "It," rated "R," 3 stars. Does it deliver what it promises? Thriller chiller. Is it entertaining? Well-told story. Is it worth the price of admission? Loved "It."
Posted by Arch Campbell at 1:51:00 PM