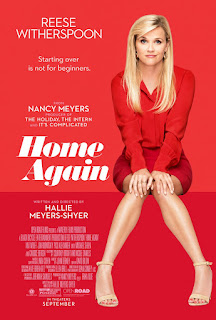 Not even Reese Witherspoon can save "Home Again," a new romantic comedy about a 40-year-old mother of two, recently separated from her husband. Witherspoon leaves New York for Los Angeles, where she lives in the fabulous home that once belonged to her late father, a famous filmmaker. On a night out with the girls, she meets three 20-somethings, brings them home, and winds up in bed with 27-year-old Pico Alexander, who happens to be a filmmaker. Comedy ensues (the filmmakers hope) except the acting, dialog, and script make this feel like a 1980s sitcom. The plot thickens, when her husband returns and discovers three's company. "Home Again" is directed by Hallie Meyers-Shyer, daughter of writer/director Nancy Myers, whose scripts include "Father of the Bride" and "Something's Gotta Give." "Home Again" doesn't offer anything new, feeling more like "This Again." "Home Again," rated PG-13, 1 star. Does it deliver what it promises? Stale, romantic comedy. Is it entertaining? Feels like a sitcom. Is it worth the price of admission? Rent "When Harry Met Sally" instead.
Posted by Arch Campbell at 9:02:00 PM