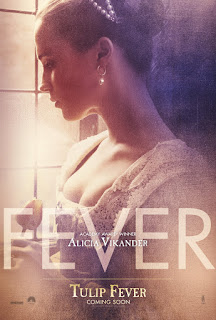 "Tulip Fever" opens under a cloud. When producers don't allow an early preview, critics start sharpening their knives. I suspect "Tulip Fever" will vanish in a flurry of poor notices, but I took a look anyway and discovered it's not that bad, even though it's not that good either. An "A" list cast includes Alicia Vikander, Christoph Waltz, Dane DeHaan, Judi Dench, and a cameo by Zack Galifianakis. "Tulip Fever" looks beautiful (almost like a Vermeer painting) which fits because the setting is 18th century Amsterdam. Virginal young & orphaned Alicia must marry old rich Christoph in a transaction that wins passage to the new world for her siblings. Amsterdam is mad for tulips, which speculators bid up to dizzying prices. Now that he has his young bride and the right to pursue the birth of an heir, Alicia's elderly husband hires virile young painter Dane DeHaan to capture the couple on canvas. It only takes a couple of sessions for Alicia to begin stealing away to DeHaan's studio for multiple soft-focus trysts. Meanwhile, the maid gets pregnant by the fishmonger, leading to a false pregnancy scheme, and a plan to make a killing in the tulip market to pay for the lovers' escape. Bubbles burst, schemes go wrong, all doesn't end well and somehow it feels like the same old same old. "Tulip Fever" is watchable and even enjoyable at times, but somehow it lacks that secret ingredient that separates the very good from the just OK. "Tulip Fever," stars, rated "R." Does it deliver what it promises? Erotic love triangle with a touch of market madness. Is it entertaining? Beautiful, but slow and sometimes confusing. Is it worth the price of admission? Meh.
Posted by Arch Campbell at 2:21:00 PM