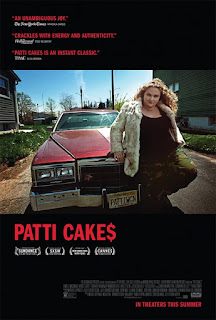 I didn't expect much from "Patti Cake$," and as a result, got one of best surprises in a long time. Australian actress Danielle Macdonald plays Patti, an overweight 23-year-old white girl working dead-end jobs in a broken down New Jersey suburb. She has a song to sing, or rather rap, in this latest twist on the "gotta sing, gotta dance" story line. Everyone in Danielle's world sings or tries to... even the elderly customers at the seedy bar where she works. Her mother once aspired for fame as a blues singer, but now lives fueled by alcohol and bitterness. Patti wants a break. After some hit-and-miss street performances, a CD demo, some harsh words, and bad luck, she gets her chance. "Patti Cake$" reminds me of the original "Rocky" or "Saturday Night Fever." It tells the story of a kid trying to make it. Her struggle makes us cheer her on. "Patti Cake$," 3 stars, rated "R." Does it deliver what it promises? Gritty coming-of-age story. Is it entertaining? Emotionally satisfying. Is it worth the price of admission? A small gem.
Posted by Arch Campbell at 5:48:00 PM