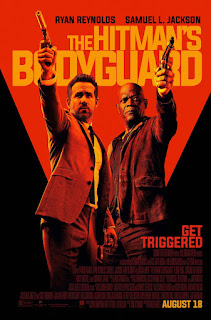 Ryan Reynolds and Samuel L. Jackson have great chemistry in "The Hitman's Bodyguard." Reynolds plays a down on his luck security agent, roped into delivering Jackson to the international trial of Eastern European strongman Gary Oldman, who manages to kill anyone who dares oppose him. This plot sets up multiple gunfights and chase sequences... too many of which, slow down the comedy. When Reynolds and Jackson have at each other, the scenes pay off with laugh-out-loud moments. In one of my favorites, they steal a car, fly out of a garage (breaking the parking arm) only to smash into a wall and set off the air bags. Jackson lets fly with a series of hard-to-resist obscenities. Selma Hayek has a delightful cameo as Jackson's hot-blooded love interest. His voice-over of the night they met also provides a highlight. On the other hand, Gary Oldman doesn't get beyond the generic movie villain. As Ryan Reynolds's love interest, French actress Elodie Yung produces little chemistry. The chase scenes run long, undermining the comedy. "The Hitman's Bodyguard," 2 stars, rated R. Does it deliver what it promises? Hit and miss comedy. Is it entertaining? Feels long. Is it worth the price of admission? Skip it.
Posted by Arch Campbell at 10:27:00 AM