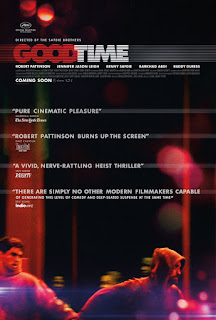 Robert Pattinson wants the world to know him as more than "Twilight's" pretty vampire boy. He gets down and dirty in "Good Time," as a Queens toughie, who persuades his mentally slow brother to help him rob a bank. The plan literally blows up in their faces: They didn't get the word about dye packs. The cops give chase, and Robert's slower brother gets caught. For the rest of a long night, Pattinson uses his wits and petty crime skills to try to rescue his brother. Things go from bad to worse. The action covers a violent night leading to not much hope in the morning. I agree Pattinson is more than the pretty vampire of "Twilight." "Good Time" feels like a tribute to "On the Waterfront," "Dog Day Afternoon" and "Midnight Cowboy." I can't say I had a good time watching it, but I think Pattinson has a breakthrough in his future. "Good Time" isn't it. "Good Time," 2 stars, rated "R." Does it deliver what it promises? Gritty crime drama. Is it entertaining? Exhausting. Is it worth the price of admission? Let's wait for his next one.
Posted by Arch Campbell at 7:42:00 PM