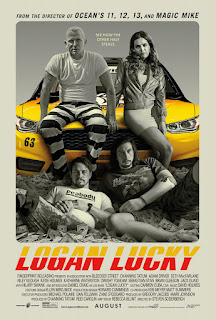 The sophisticated director Steven Soderbergh came out of "retirement" to create "Logan Lucky," an "aw shucks" southern fried comedy, starring Channing Tatum as a good-natured guy laid off from a construction job in a mine under the Charlotte NASCAR track. Things get worse when Channing's ex-wife (Katie Holmes) informs him she and her new husband are moving to Virginia to open a Ford dealership. That move will separate him from his adoring daughter. Frankly, the distance from Charlotte to Lynchburg isn't that far, but Channing decides he must pull off a heist to create a nest egg for him and his friends. They include his brother, played by Adam Driver, and Joe Bang, a local safe cracker, played so well by Daniel Craig. It took most of the movie to realize I was laughing at the antics of the guy who plays James Bond. The heist is complicated and confusing; but I don't think it matters. "Logan Lucky" hums along, thanks to many delightful performances including cameo appearances by Katherine Waterston and Hillary Swank. A scene in which Adam Driver explains the curse on the Logan family adds to the fun. "Logan Lucky," 2½ stars, rated PG-13. Does it deliver what it promises? Corn buddy comedy. Is it entertaining? Great fun. Is it worth the price of admission? Don't expect greatness, just go for the fun of it.
Posted by Arch Campbell at 5:47:00 PM