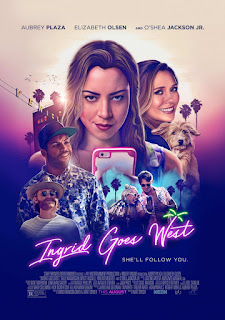 The uncomfortably funny Aubrey Plaza plays an obsessive young woman with impulse issues in "Ingrid Goes West." We get a hint of what we're in for right off the bat, when Ingrid crashes the wedding of a woman she barely knows and pepper sprays the bride for lack of an invitation. This act puts her in a mental hospital; but after a time, the doctors pronounce her well and turn her back to society where some quirks of fate give Ingrid the money to go to California to follow her latest obsession. Elizabeth Olsen plays said obsession, an Instagram celebrity capable of hashtags such as "Avocado Toast" and "The Best!" Soon Aubrey and Elizabeth are best buds, until things begin to unravel. "Ingrid Goes West" features a nice performance by O'Shea Jackson Jr. as Ingrid's landlord and reluctant boyfriend. A good supporting cast includes Wyatt Russell as an unhappy husband, and Billy Magnussen, who recognizes Ingrid's obsession and doesn't hold back. This comedy takes a dismal turn, rewarding Ingrid for actions I can't condone. It feels like the writers wrote themselves into a corner, and didn't know how to end this. "Ingrid Goes West," 1 star, rated "R." Does it deliver what it promises? Uncomfortable comedy gone wrong. Is it entertaining? Runs out of gas. Is it worth the price of admission? Skip it.
Posted by Arch Campbell at 5:22:00 PM