The Trip to Spain Review - 2 Stars 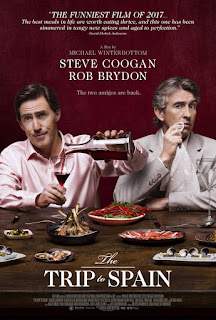 Steve Coogan and Rob Brydon took an improvised trip through England a few years ago. The apparently ad libbed result drew laughs from audiences who enjoyed watching this jolly pair. "The Trip" spawned "The Trip to Italy," and now "The Trip to Spain." Once again, Brydon gets an assignment reviewing great restaurants, and Coogan dreams up an assignment so the two can travel together. Let's call it a "bro-cation," a couple of guys acting silly, doing delightful impersonations of Mick Jagger, Michael Caine, and Roger Moore. Winding the back roads of Spain, they perform the 1960's song "The Windmills of your Mind" in its psychedelic entirety. "The Trip to Spain" gives fans more of the same, but nothing new. I laughed until Brydon went home and Coogan began dealing with family and relationship problems. This turn creates a major buzz kill. Either Coogan and Brydon didn't know how to end this saga, or they decided to end it with either a bang or a whimper (depending on your interpretation.) "The Trip to Spain," 2 stars. Does it deliver what it promises? Two actors trying to outperform each other. Is it entertaining? At first, but runs out of gas. Is it worth the price of admission? Not the best.
Posted by Arch Campbell at 6:04:00 PM