The Only Living Boy in New York Review - 2½ Stars 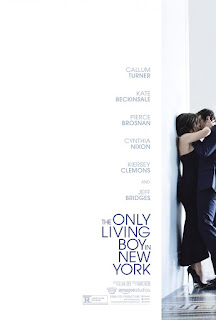 "The Only Living Boy in New York" combines a dash of Woody Allen, a pinch of "The Graduate," and a spoonful of coming-of-age for a familiar, entertaining result. Young Callum Turner wants the world's attention as a writer, practicing his quips at his mother's (Cynthia Nixon) elite dinner parties. But then again, if he's so smart, how come he can't get started with his girlfriend (Kiersey Clemons) who prefers friendship, but nothing more. Suddenly the kid discovers his father (Pierce Brosnan) has a mistress, and begins to follow her in order to protect his depressive mother. The encounter goes wrong, and soon Callum finds himself in bed with his father's mistress (Kate Beckinsale.) Meanwhile, alcoholic neighbor Jeff Bridges guides the kid in a series of man-to-man talks that lead him through this muddle. I wondered how the writers would solve these triangles, and they came up with an "only in the movies" solution. But still... Jeff Bridges gets to chew the scenery and read some juicy voice-overs. Kate Beckinsale appears cool and sexy. Pierce Brosnan roars like a wounded lion. Callum Turner sulks like a young Dustin Hoffman. I've seen it all before and so have you; but fun is fun, and "The Only Living Boy in New York" is great fun. "The Only Living Boy in New York," rated "R," 2½ stars. Does it deliver what it promises? Woody Allen-style Manhattan sex comedy. Is it entertaining? Fun and familiar. Is it worth the price of admission? Why not?
Posted by Arch Campbell at 5:31:00 PM