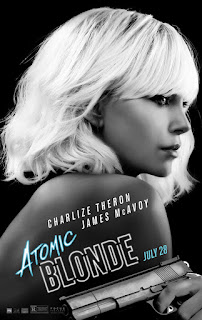 Charlize Theron kicks ass in "Atomic Blonde" - as well as the chests, ribs and throats of the multitude of thugs out to kill her. She muscles her way through this stylish, but confusing thriller, taking a break from the action for a regular ice bath to heal her many wounds. Set in 1989, right before the fall of the Berlin wall, Charlize must find a "list," which cannot fall into the wrong hands. The movie begins with a bang, as her fellow agent and one-time lover gets smashed by a car, disabling him for a few pithy remarks, before getting his head blown off. Charlize races to Berlin in the name of revenge and the list, to team with embedded agent James McElvoy, a wily veteran who easily moves back and forth between East & West Germany. Charlize finds a new love interest in Sofia Boutella, a French agent who begins tailing Charlize and moves up to bed mate and associate. Told in flashback to a skeptical Toby Jones and John Goodman, the plot serves as an excuse for a string of fight-to-the-death encounters. "Atomic Blonde" achieves new levels of brutality, including a few seconds where Charlize and her attackers gasp for breath and wobble around, as they try to find the strength to continue, while screaming like wild animals. The fight scenes overpower everything. Two hours of this, feels excessive. How much of this do you really want? "Atomic Blonde," 2 stars, rated "R." Does it deliver what it promises? Girl power, on steroids. Is it entertaining? A little much. Is it worth the price of admission? The filmmakers hope to turn this into a franchise. Not sure I'm up for it.
Posted by Arch Campbell at 11:47:00 AM