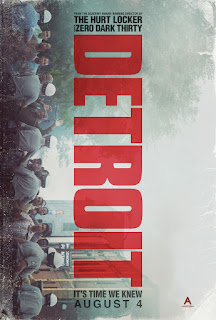 Kathryn Bigelow revisits the Detroit riots of 1967 to brutal, but brilliant effect in "Detroit." Weaving together the stories of a musician, security guard, and an abusive cop, she focuses on the night police swarmed the Algiers Motel to discover two young white women partying with a group of Black men. The authorities storm the area, looking for a sniper and determined to get a suspect. They don't know the shot came from a starter pistol, fired at the end of a rant about conditions in the city and treatment by the police. During this event, three black men, and three white policemen go to trial for murder. Will Poulter plays an outraged white policeman with a blend of arrogance and fear. John Boyega plays a security guard who arrives to help, but silently witnesses an atrocity. He serves as the viewer's witness. "Detroit" feels like a visit to a war zone, made realistic with news clips from the period. Bigelow brought audiences into battle in "The Hurt Locker" and "Zero Dark Thirty." In "Detroit," she brings the battlefield to America. Many in the audience I watched with, wept, others got up and left, unable to take it. Some will find "Detroit" too long, while others will see this as art that challenges. "Detroit," 3½ stars, rated "R." Does it deliver what it promises? Brutal, strong issue film. Is it entertaining? Artistically challenging. Is it worth the price of admission? One of the year's most important stories.
Posted by Arch Campbell at 3:41:00 PM