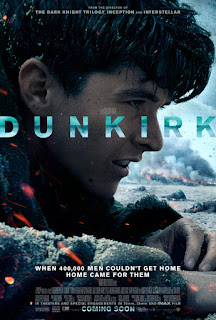 "Dunkirk" will likely join the ranks of great war movies, thanks to the expertise of director Christopher Nolan, best known for high-octane, summer fare including "The Dark Knight" and "Interstellar." Nolan turns history into a countdown action thriller. The time is May 1940. The Germans have outflanked French and British troops, pushing them to Dunkirk beach, just across the channel from England. In the opening scene, leaflets shower the doomed soldiers. "You are here," they read, showing the sea on one side and the Germans on the other three. History buffs know the British government called on civilians to pilot their boats across the channel and bring home as many soldiers as possible. In all, the civilian and military retreat saved over 300,000. "Dunkirk" recreates the rescue in three parallel stories... land, air, and sea. Tom Hardy fights the Germans in the sky, while Fionn Whitehead shows us the story from the ground; and Mark Rylance represents boat owners answering their nation's call. Sometimes the three stories are hard to follow. The soldier on the ground feels like a composite of several experiences into one. The aerial dogfights certainly amp up the action. Mark Rylance represents man's better nature, stating that middle-aged men caused the fighting and therefore must do their part. Nolan avoids the usual word salad explaining the war and the aftereffect of this event. I went home and read about Dunkirk. How many movies prompt you do to that? "Dunkirk," rated PG-13 and 3 star. Does it deliver what it promises? War movie from three angles. Is it entertaining? Epic. Is it worth the price of admission? History buffs will love.
Posted by Arch Campbell at 6:06:00 PM