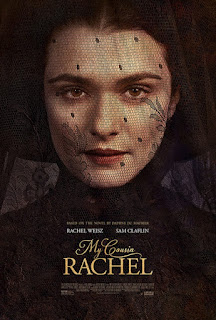 "My Cousin Rachel" feels like an old school cousin to Alfred Hitchcock's classic "Rebecca." It ought to, as both films are based on stories by Daphne du Maurier. In "Rachel," a young man (almost of age) mourns the death of his beloved guardian, who left for Italy and married a distant cousin, only to die leaving behind clues & notes, that she was trying to poison him. Rachel arrives at the estate left to young Sam Claflin, and soon his hate & distrust turn into puppy love. We're not sure if she's manipulating him or not; but pretty soon, she's in control of both the boy and his wealth. "My Cousin Rachel" feels like an old movie, possibly in need of a few modern touches; but I love old school films and found this one a delight. The conclusion left me entertained and satisfied. How often does a movie do that? The direction's steady and the scenery is beautiful. Weisz captures Rachel's enigma. The plot simmers & boils, and includes a couple of bodice-ripping, heavy breathing scenes. Hot stuff for the 18th century. "My Cousin Rachel," rated PG-13, 3 stars. Does it deliver what it promises? Old school thriller romance. Is it entertaining? Delightful. Is it worth the price of admission? A classic.
Posted by Arch Campbell at 5:55:00 PM