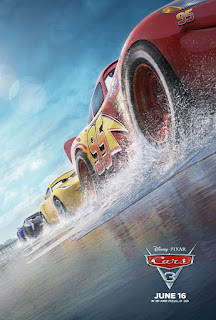 The original "Cars" delighted audiences, as Paul Newman voiced a 1951 Hudson Hornet named "Hud" (get it?) who takes speed racer "Speedy" McQueen voiced by Owen Wilson under his (ahem) fender. "Cars 2" fell short of the original. Now "Cars 3" adds a completely unnecessary third installment. The hot race car "Speedy McQueen" isn't quite so hot anymore, compared to the new models on the track. "Speedy" goes in search of his mojo, and finds new friends including a training car named "Cruz," voiced by Cristela Alonzo. Ultimately, the training car strikes a blow for girl power, but I don't want to give anything away. "Speedy" gets a few new life lessons from "Hud," thanks to outtakes from the original voiced by Paul Newman. In spite of the less-than-great plot, "Cars 3" features Pixar's usual amazing computer animation. The manner in which the cars move and talk continues to impress. "Cars 3" also showcases wonderful voice work, particularly from Chris Cooper and my favorite Margo Martindale, who plays a 1950 Nash. Fans of the original will be happy to see Larry the Cable Guy's tow truck "Tow Mater," a character who continues to steal every scene in which he appears. I think the message of "Cars 3" is Pixar had to put something on screens this summer, and this is it. "Cars 3," rated G, 2 stars. Does it deliver what it promises? Pixar animation of familiar characters. Is it entertaining? Great animation, weak story. Is it worth the price of admission? For kids.
Posted by Arch Campbell at 6:05:00 PM