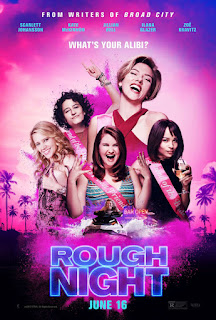 Scarlett Johansson's getting married in "Rough Night." Her college roommates insist she join them in Miami for a bachelorette party. Sound familiar? Well it should, because "Bridesmaids" had the same plot. Once in Miami, the girls drink too much, binge cocaine, and hire a male prostitute. Sound familiar? Well it should, because "The Hangover" had the same plot. When the girls hire the male prostitute, one of them jumps on top of him, causing him to hit his head and die in a freak accident. What to do with the body? Sound familiar? Well it should, since that's the setup of "Weekend at Bernie's." In spite of, or probably because it lifts these setups from successful comedies, "Rough Night" feels forced. Comedy is not Scarlett Johansson's strong suit. Sure, there are some laughs, but "Rough Night" simply tries too hard. Speaking of trying too hard, Demi Moore shows up in a cameo as a sex-addicted neighbor in search of a threesome. That's not funny, it's desperate. "Rough Night," rated R, 1 star. Does it deliver what it promises? Girls gone wild comedy. Is it entertaining? Occasionally funny. It is worth the price of admission? Skip it.
Posted by Arch Campbell at 1:21:00 PM