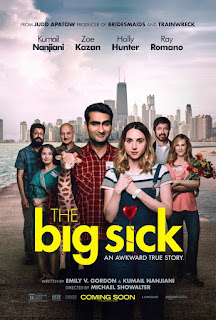 Stand-up comic Kumail Nanjiani breathes new life into the motion picture romantic comedy in "The Big Sick." Embellishing on the story of his romance with his now wife, Nanjiani threads the culture clash needle between a North Carolina-bred psychology student (and her parents) and a first-generation Pakistani, whose parents demand he agree to an arranged marriage with a Pakistani woman. The couple meet, after she heckles him during a performance. They resist getting serious. The more they resist, the more serious they get. The crisis comes when he confesses he can't marry a white woman. Boy gets girl, boy loses girl. But then, she develops a mystery illness, which escalates to a hospital stay, followed by medically-induced coma. Nanjiani bonds with her parents (beautifully portrayed by Holly Hunter and Ray Romano.) Meanwhile, Nanjiani's parents continue to subject him to a parade of possible mates, who somehow manage to "drop in," whenever he visits. "The Big Sick" hits its stride when he confesses his love for a white girl to his parents' horror & displeasure. This leads to the line, "Why did you bring me to America, if you won't let me live an American life?" It's a good question, and a show stopper. If you only see one movie this summer, make it "The Big Sick." 4 stars, rated R. Does it deliver what it promises? One of the most thoughtful romantic comedies in years. Is it entertaining? Never a dull moment. Is it worth the price of admission? See it.
Posted by Arch Campbell at 7:37:00 PM